Week 2, well technically we are in week 3 now, but still we are finished week 2 and this is a short overview of this weeks assignments and my overall thought on the course thus far.

I can’t stress to ya’ll enough the amount of reading in this class. It’s a lot but as I said in the vlog all very important to the course so not for nothing. Make sure you are reading all you can as it does really help when completing assignments. Read, Read, Read, and Read some more for good measure.

This week’s discussion was rather interesting. We had a list of videos (Short Films) to pick from and we had to choose 1 to use for our discussion post. I go into more detail about the video I chose, “Spider” in the vlog. Any who I picked that video to do my discussion on and basically we were tasked with identifying the various elements such as writing, cinematography, editing etc.

As with every discussion post there is more often than not a peer response that is due as well. This week we had to pick 2 student’s discussions, not of the same film we chose, and respond to them using the RISE model. We had to respond in a way that we keep the conversation going reflecting on the elements they picked as well as adding our own etc.… For this I did three responses.. LOL I know over achiever.

You know I had thought the mood board task was a bit much in the first week until I got to week 2 and the 30-slide presentation of the 5 stages of production assignment… Oh Holy Moses was this a lot of work. We were instructed to create a widescreen presentation in PDF format of 25 – 30 slides on the 5 stages of production. Research & Development, Pre-Production, Production, Post Production, Distribution & Exhibition….. Sounds easy enough and for the most part it was however we also had to include images… And not only include images for each slide but APA cite those images. Basically, each slide would have 1 – 2 images visually depicting what it was we were explaining. Under each of the 6 stages we had to go into a little detail on the steps.. For example, in pre-production there would be lighting, filming, audio…. etc.…

This wasn’t what was so bad it was all the resources that had to be APA cited that took a majority of the time.

Copy paste, copy paste… which didn’t make sense because in the assignment, the instructor provided a couple of student examples and one of them the resources were just listed links to the images. I was so confused as to what we were supposed to do I figured to be safe I’d APA cite them all which made a boat load of work on me because WOW that was a lot of copy and pasting.

And just like that week 2 is over… Wow I don’t know about anyone else, but this month is just flying by.

Join me back here again next week for week 3 overview and vlog. 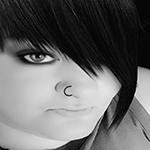 I am Vinnie!! I am a Full Sail University Graduate with an Associate's Degree in Digital Cinematography. I am a mom and and nerdy geek!!! I love to tell stories and understand unexplained things. I hope to eventually be able to film my own feature length documentary. Until then i will surround myself with my passions for Dungeons and Dragons, movies, video games and books.